How Does Quick Change Magic Work? 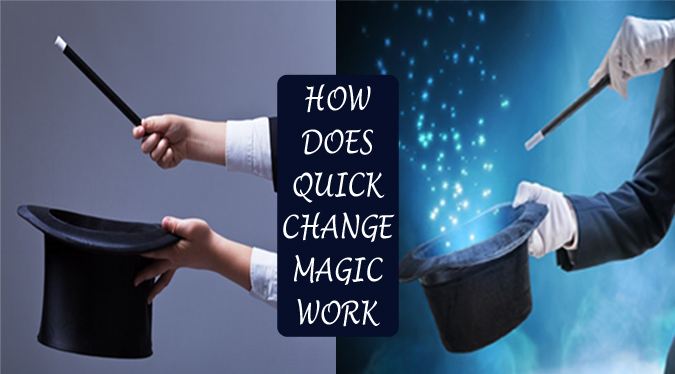 How does quick change magic work? Surely that is a question that bugged your mind when you saw David Maas and Dania Kaseeva leaving America’s Got Talent judges and thousands of audiences awestruck with their super-fast wardrobe changes. You know magic is not real, but you cannot help but wonder, ‘’Is it?’’ when you see a quick change artist at work.

The most common way to pull off quick change magic tricks is to put on multiple costumes at the same time and get rid of the layers in such a way that it creates an illusion of fast-changing.

Today, we will spill the beans about the behind-the-scenes tricks that make quick change magic such a fascinating watch. Are you ready to get your mind blown? Hop on!

What Are The Most Common Tricks Quick Change Magicians Use?

Magicians who are at the top of their games improvise some tricks of their own, which are unknown to others. But, there are some common tricks that all artists resort to. In this section, we will look at some of the standard techniques that even celebrity quick changers like Léa Kyle uses from time to time:

What Special Supplies Are Used For Quick Change Tricks

Costume designers prioritize the removability aspect while designing outfits for quick change magic tricks. Apart from that, they need to figure out a way to keep the costume layering as ambiguous as possible. For this reason, skirts are quite a popular choice for quick changing. They are easy to remove, and their loose-fit nature hides the bump perfectly.

Velcros, snaps, are magnets are the most commonly used release mechanisms. Velcros and snaps are the go-to options because of their simplicity and affordability. Magnets are a bit more difficult to integrate into a costume, but once they are installed, they offer a quick route out of the dress as well.

How Do Quick Change Artists Put On New Clothes?

If you are thinking about doing a lengthy show, costume layering might not cut it for you because there is only so much you can wear together. So, you have to find a way to put on new costumes in a minimal amount of time on stage. Here are two effective methods of doing it:

To explain how quick change magic works, let’s analyze a real performance. There were a lot of great acts to choose from, but we finally settled our minds on Ellie K. Park and Jeki Yoo’s performance in Britain’s Got Talent 2018. More commonly known as ‘’Ellie & Jeki’’, the couple had undoubtedly practiced the routine hundreds of times before gracing the stage of Britain’s Got Talent.

How did they change their dresses so fast behind the curtain? One possible explanation could be that the stage crew stashed away the outfits inside the black cloth. Therefore, it appeared that they changed their clothes out of nowhere.

As the act progressed, Ellie & Jeki kicked it up a notch with their impressive range of creativity. In a truly multilayered performance, they switched between nearly a dozen of costumes in only a matter of minutes. In many cases, they did so behind an umbrella or in hazy stage fog, making the performance incredibly outstanding.

Once you look behind the fantastic theatrics, however, you can identify the common pattern that made this act work.

As you watch the clip a couple of times, you will notice that the duo always pulls their costumes in certain strategic locations. These parts of the outfit enable the wearer to take it off in an instant. With ample practice, they can remove the dress in the narrowest window they get when they momentarily move out of the audience’s vision.

The duo had to wear layers of inner clothing to successfully execute this act. Pay close attention to the time they walk onto the stage. Their attires seem bulkier than usual, don’t they? That’s because they are wearing more clothes inside so that they can seamlessly reveal them during the performance.

How does quick change magic work? We have tried to explore the answer to that question throughout this piece. Even though you know the secrets now, you should realize that quick changing is a craft that requires a lot of practice for perfection. So, if you want to be a quick change artist yourself, you must back up your passion with hard work.