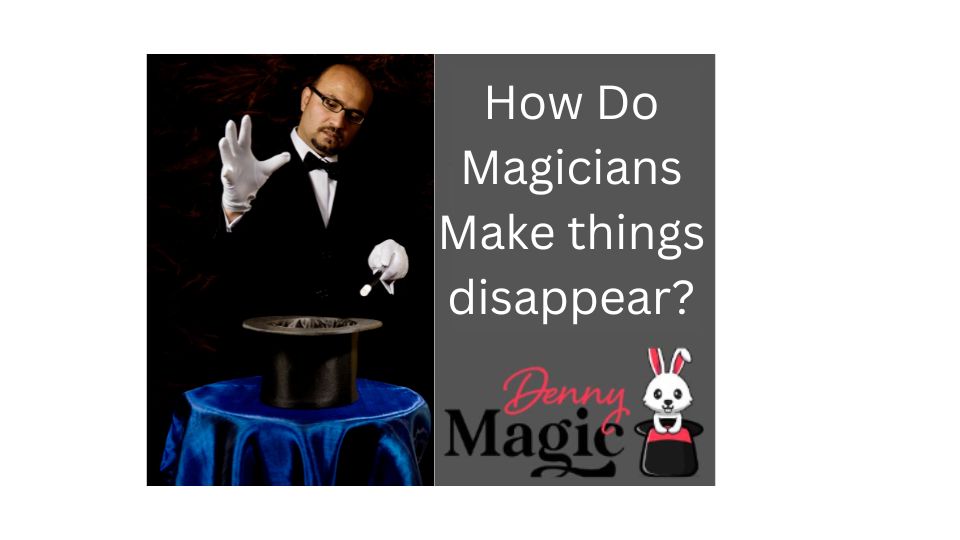 From turning small items into large animals to making entire human disappear before your eyes, we’ve all been captivated with the mysteries of magic at some point in their life. Have you ever wondered how magicians make things appear and disappear in the blink of an eye?

In this blog post, we’ll explore the fascinating world of disappearing objects and discover more behind these amazing tricks. Read on.

How do magicians make things disappear?

The secrets behind the disappearing objects rely heavily on misdirection – distracting their audience’s attention away from what is actually happening, allowing magicians to pull off these breathtaking acts without any suspicion or detection.

Magicians use sleight-of-hand techniques, body language manipulation and props such as mirrors or trap doors to create an illusion of something disappearing before your eyes.

In addition, magicians also rely on the power of suggestion – creating an expectation in their audiences’ minds that something exists when it does not – this helps them create seemingly miraculous effects that leave audiences stunned.

By combining all these methods together, magicians are able to craft amazing performances where objects appear or vanish at will with a wave of a wand.

The most common method for making large objects disappear is by using a cloth or other piece of fabric to cover the object and then quickly removing it. This causes the object to become hidden from view and creates the illusion that it has vanished.

Other methods for making large objects disappear include using mirrors or other reflective surfaces to create the illusion of invisibility, using sleight of hand to quickly remove the object from view, or using special props that can be dismantled or folded up to make the object seem to vanish.

Whatever method is used, the goal is always to create the illusion that the object has disappeared or appear without a trace.

Making things disappear like a magician is no easy feat. It takes skill and practice to be able to master the art of misdirection, sleight of hand, distraction, and other techniques used by magicians.

To begin with, it’s important to understand the principles behind how objects appear or disappear in an illusion. Start by studying optical illusions and familiarizing yourself with the basics such as light and shadow manipulation.

Then move onto learning various sleight-of-hand moves including palming items quickly without anyone noticing – this will help you make objects seem to vanish in an instant! Once you get comfortable with these core skills, then start experimenting with props such as mirrors or screens that can be used for hiding items from view – this way you can create more complex illusions!

Finally don’t forget about misdirection – if done correctly it can really help add drama and suspense to your vanishing act! By drawing people’s attention away from what is happening on stage (such as making something appear/disappear), they won’t even realize when your trick has been completed until it’s too late.

So remember; practice makes perfect when it comes to making things vanish like a true magician. With enough dedication and effort you too could become a master of disappearing acts.

In conclusion, the secret to making things disappear can be attributed to the magic, art and mysterious ways of magicians. Every magician has his or her own special technique they use to make things appear or vanish in a split second.

As incredible as it may seem, with enough practice and hard work anyone can master this skill. The joy of seeing something seemingly disappear is second-to-none, whether you are performing onstage or just having a bit of fun with friends and family.